Our Milkmen stopped a Burglary last night in Warrington

We are very proud of our milkmen Patrick Finn and Darren Ferris who prevented a burglary last night in Altrincham. 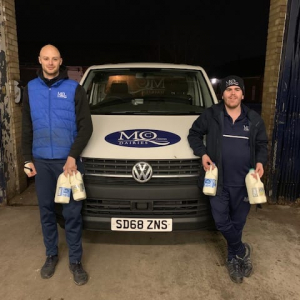 Patrick Finn and Darren Ferris from our Warrington depot were on their usual milkround around the Greater Manchester and Cheshire area when the pair spotted some men attempting to climb in through the front window of a property on Peveril Road, Broadheath.

The milkmen shouted at the men who fled the scene. Darren then phoned the police and stayed to provide details to officers when they arrived.

Patrick and Darren’s story was picked up by the local press in Warrington and Altrincham.

McQueens Dairies are really proud of the employees actions !

To order your own milk delivery simply visit our online shop.